When I first heard about a TV series being made from comic book series The Walking Dead, I was abit leery, having read the comic book and loved how it wasn't just a zombie story, but it had logical and believable laws to it, like how you don't become a zombie if you get bit, you become one when you die, you can be saved from it if you remove a body part thats been bit, or how you need a nerve system to become a zombie, stuff like that, it seemed to fill in the blanks for most of the annoying things that weren't really all that well explained through all the years of zombie lore. Plus, well comic book to TV show adaption haven't actually been the greatest moments for either genre in the last 20 or so years. Plus, well non-pay channel cable hasn't always been the most faithful place for a series based on something super violent to be, if it wishes to remain intact, and also, as I have stated many times, the bitter taste of never getting more then one episode of Babylon Fields still lingers in my mouth at this point. All these things added to why I kind of have bad feeling about The Walking Dead, but still come Halloween night when it debuted, I still watched it and gave it a chance.

The pilot starts out with Officer Rick Grimes in his cop car, as it comes to a stop outside of a chaotic scene outside a gas station, as he walks up to attempt to find some gas, he encounters a little girl whom he thinks is a normal girl, she then turns around and much to his horror, the girl is a zombie, whom he shoots dead in the head the second she starts to run at him. Then the focus switches to a flashback of Grimes sometime earlier with his partner, sitting in their patrol car on a rutine traffic detail, and talking about relationships and how each of theirs are going, when they get a call to respond to a police chase, heading out to the call and helping by setting up a stop strip to take down the car they're chasing, once the car is rolled and stopped, three men get out and start shooting at the officers, all three men are killed on the spot, but Grimes is shot just above the heart. After seeing his partner show up to see him, then drifting into a coma, Grimes wakes up alone, apparently weeks later, to a completely empty hospital that looks like its been in a war, he discovers a completely eaten body along the way and is puzzled by this, not knowing whats gone on, but he still goes about looking for help, for someone that can help him.

He comes across a door thats boarded, chain locked and has "do not open, dead inside" on it in giant letters, he gets close, and sees hands starting to come out of the door, and hears the yelling of zombies, in fear he runs off and finds himself in a darkened hallway, using a found pack of matches, he finds his way to a door outside, near the back loading docks. He stumbles out into the sun and looks around only to find stacks and stacks of bead bodies, all wrapped in white sheets and with bullets through their heads, they look as if they've been here for a great deal of time, horrified at this Grimes continues on outside the walls of the hospital grounds, he walks up a hill, to another part of the grounds, where it looks like at one point there was a military command post set up, also completely lined with bodies, he then walks past this, and ends up in a city park, where as he attempts to get himself a bicycle, he encounters his first zombie, a torso that was slowly crawling toward him, hissing and growling all the way. He takes the bike and quickly evades the half a person, and heads for his home, which he finds empty, believing his girlfriend and son dead, he cries and starts to wonder if this is all a nightmare, he walks outside and sits on the front steps of his home, he sees what he thinks is another survivor, it turns out that one is a zombie, but before he can discover this, he's beat in the head with a shovel by a young child, who's father comes out of nowhere and shoots the zombie walking toward him in the head. He then asks Grimes what his wound is, but he passes out before he can tell him.

Grimes wakes up in the care of the man and son that just knocked him out, the man having treated him by replacing his bandage over shot chest where the bullet hit him earlier, he is however, restrained. And after telling the man that he was shot, not bitten or chewed on or anything else, he's set free, Grimes then makes his way out of the room to a kitchen area where the man and his son are having dinner. Over dinner they explain to Grimes whats been going on while he was in a coma, explains that there are walking dead, and the dead that have been put down, and implies that whatever was left of the military left the survivors there to die. After dinner is probably the most scary scene I've seen on television sense Dead Set, a car alarm is triggered and after looking through a very small window, you see that there is an entire street of zombies, just roaming around, you then find out that one of them is the man's wife. The next morning, Grimes and his two new friends go looking through Grimes' home, and he discovers that there are missing clothing, and missing pictures and things that he believes his wife would take if running for safety. They then head to the police station which has its own emergency power, water and heating. After bathing, and getting into clean clothing, and a trip to the weapon storage area, deciding up all the weapons and ammo, Grimes and his new friends part ways, each taking a police radio to use for contacting each other if an emergency happens. Grimes goes back to his house one last time before heading off for Atlanta, where its said there is a giant refugee center run by the CDC, assuming that would be where his wife and son are. Before he leaves, Grimes goes back to the park where he met his first zombie, and puts it down by a bullet to the head. Back on his street, the man that helped Grimes tells his son to stay down on the first floor, while he goes up to the second and using a sniper riffle, goes through what is probably the most gut-wrenching scene in the entire episode, where he tries, but can't bring himself to shoot the zombie that used to be his wife, though he has no issues shooting the others near by.

Grimes next is seen driving down highway 85 toward Atlanta, using his emergency radio to send out a beacon of sorts to anyone thats possibly listening. His broadcast is picked up by a group of survivors, one of which is his former partner and also, his wife and son are among them too, who seems to be organizing this group that is held up at a farm somewhere near by, they try in vain to contact him, though he seems unable to hear them, they can hear him, though he didn't ID himself by name, which leaves the group in the dark on who he is. Grimes finds his way to Atlanta, on horseback sense his car ran out of gas, completely unaware that going anywhere near the city is a zombie death sentence, and after seeing and trying to flag down a helicopter, he runs afoul of a large group of zombies, which leaves his horse dead and him eventually trapped inside of an M1A1 Tank, and as he feels he's completely surrounded and going to die, he hears a voice over the tanks radio, and in true episodic television show style, thats where the episode ends.

The show itself as a whole is incredibly well done, I was abit leery given how little I've cared for AMC's other original television shows, Breaking Bad, Mad Men and Rubicon, all well made and well written, they just don't grab me. But who am I to judge, I still miss Remember WENN (haha... obscure television reference). But The Walking Dead seems to be more my kind of thing, sure I tend to lean toward Sci fi and stuff more, as well as brave shows that aren't scared of taking a risk or two to get something done, but still its a great show, and its not afraid to blow afew heads open to get where it needs to go. Plus also, I'm glad to see Andrew Lincoln, whom I was delighted to see again after his memorably role of Robert Bridge on the series Afterlife, which as I've always said was the greatest sci fi series of all time, he's just as good here, if you ignore his faked southern accent that is, and well, after the first few minutes you tend to forget its there. 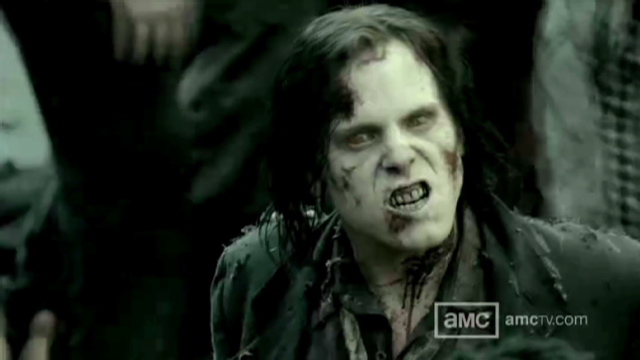 So if you're up for abit of a scare, and abit of unconventional action, or you just for some reason like to see walking dead people get shot in the head, give this show a shot, you will not be let down.