Trips In The Wayback Machine # 3:

The New Zoo Revue:
Foam Rubber Puppets That Are
Apparently Coming Right At You

In the annals of both wholesome, innocent and well meaning children's programing, as well as the pantheon of classic campy cult tv series, there are many, many programs originally ment for children, that either do to their time period of creation, or possibly their horribly low budget camp production and writing, sure they served a purpose and as we remember them as children we do remember the lessons they taught us, but unlike our last trip in the wayback machine to visit Romper Room, our next stop on this trip down memory lane sadly does not retain its wonderful innocence or elegance, and though many can assume that this classic series was really nothing more then a wholesome attempt at the foam rubber creature kiddy shows dominated by the creations of brothers Sid and Marty Krofft. But for all that its trying to do, educate as much as possible while entertaining, The New Zoo Revue, goes from wonderful children's programing, to camp awesomeness, its kind of like Davey And Goliath in that respect, it tries so hard to be one thing, but shoehorning as much of its attempts it can into its timeframe, it just becomes awesomely hilarious looking back at it. Oh and also, don't worry, I'll be taking a trip in the wayback machine to visit Davey And Goliath later, but for now, lets focus on The New Zoo Revue. 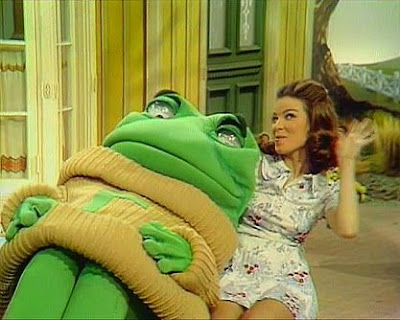 Spanning 197 episodes from 1972 to 1977, The New Zoo Revue was the brainchild of its two human stars, Doug Momary and his then newly married bride Emily Peden, Doug ofcourse played well meaning but creepy looking "Doug" on the show while Emily played Emmy Jo, Doug's tight miniskirt and go-go boots wearing "helper" who, though a very talented singer, dancer, and artist, brought an entire generation of boys (and I'd assume alot of girls too) into puberty simply by being there. The show's concept was pretty simple, it was ment to go against such iconic children's programs as Romper Room, Captain Kangaroo, Sesame Street and their kind, as well as to take a share of the foam rubber puppets with singing and dancing and a stage show genre that was making Sid and Marty Krofft millions faster then they could create failed indoor amusement parks that would later become the CNN Building. The show, from its creation all the way till the last season when the ratings slumped and they were unfairly canceled, was a huge success for the time period, it was popular with children and adults as well in a cult capacity, spawning coloring books, plush toys, lunchboxes, sing along records and read along storybooks, as well as boardgames and just about anything else there would be before Star Wars revived the action figure genre. And it did all of this regardless of the fact Doug looks like a cross between a book store owning pedophile and that guy Stanley Tucci played in The Lovely Bones.

Each episode followed the same basic format, one of the three main characters; Henrietta Hippo, Freddy Frog or Charlie Owl, would some how end up either confusing something or imagining something or just start being a jerk to everyone for no real reason, then Doug, or Emmy Jo depending on how high the skirt she work to work that way was, would show up out of nowhere, be all confused as to whats going on, then they'd sing about it, and then the animal would go back acting the exact same way as before the song, which would lead to another song, and by the end of that song they'd get the point, and then they'd all sing a happy song and they'd all eat some pie or cake or something the hippo made, which is kind of ironic because of the three of them, Henrietta Hippo was the biggest jerk, I mean the puppets were all at various times jerks to each other, but Henrietta more then the other two, which is hard because Charlie had his moments. Alot of you might think I'm being funny or mean here, but I'm serious, if you can get through any of the youtube clips of this show, have a look, at any given time all three of the puppets are being jerks to each other. Henrietta is angry and bossy and delusional, Charlie is a know it all who thinks he's the greatest smartest bird ever, and Freddy I honestly think either has a learning disability or might just be a special needs person, most episodes really do revolve around Doug or Emmy Jo's go-go boots and miniskirts solving something that any two or all three of the puppets are fighting about, I'm seriously not making this up. Its hard to be critical of this how though, I understand that though its easy to poke my fun sarcastic jabs at it from my adulthood, the fact remains that though it was badly written, and cheaply made, and the puppets were downright nightmare fuel, it still stands the test of time as one of the best children's shows ever made, sure it didn't really become more then just a hazy vague nightmare of a foam rubber hippo trying to kill most people until the late 1990s when the US government mandated the whole E/I educational children's programing laws for every television station in the country, which lead to the revival of reruns of old television shows like this, and maybe its not as well remembered as Captain Kangaroo, Bozo The Clown, Romper Room, or any of its compatriots of a bygone era of children's programing when it was about the show, and very little merch would released, instead of today where a show doesn't make it to air unless they've already whored it out to 40 manufacturers for everything from dolls to cameras to iphones or whatever, and then they worry about the caliber of the program, but stuff of that really in the end doesn't matter, because as silly as alot of this stuff is looking back, it still makes us smile, it still makes us happy, and it still makes us all wish for a bygone time when the children of the world were educated by those that actually cared, and wore miniskirts and go-go boots. So if you've never actually seen The New Zoo Revue, have a look around youtube, or the internet in general, you'll find some pretty amazing stuff, sure its gonna be all trippy by today's standards and you'll find the most famous outtake in children's television history, as well as one of the many apperances of postman Mr. Dingle, who was played by a young Chuck Woolery, as well as other various famous people who show up. Oh and if you can find where its disappeared too, there used to be a clip on there of creepy Doug singing about sexual reproduction to the puppets. So yeah, enjoy the hell out of that one.... 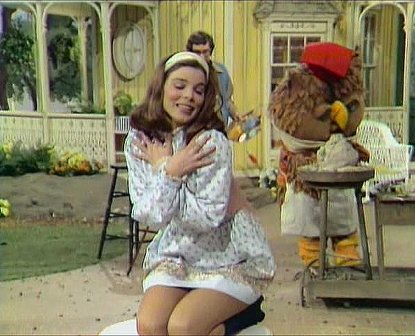 Here is a great little example of the show, and its got the ending theme, which btw, is the same theme as the opening of the show, so enjoy..