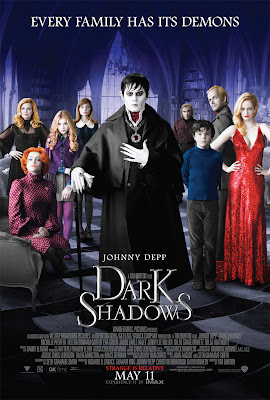 Dark Shadows:
...Remember That Trainwreck At The Start Of Super 8?
Yeah, Its Like That.. Kinda... A Trainwreck I Mean

I know alot of people are out there curiously waiting for my review of this film, its arguably the third most questions I get in my emails after questions about The Avengers and The Dark Knight Rising, this one just slightly edges ahead of questions about The Amazing Spiderman. And I guess that is rightly so given the screen name I have chosen to avail myself of in this vast wasteland we call the internet. Many a day have I had to answer the normal dregs "Do you think it will be great?", "Are you looking forward to it?", "do you like John Depp in the main role?", ect..  all these repeating questions, and now I can finally answer them, though I doubt if what I have to say will make alot of you out there happy. Because honestly, this film, as great as it could have been, is flawed, and I don't mean one little scratch under a caster that doesn't ruin the value, I'm talking it needs a full on repair job to fix the giant crack in it. Now I know afew of you out there will believe I am writing this in a negative light simply because I have been on record as disliking the way they've made Johnny Depp look as a vampire, and though I admit, that slightly bothered me, it was the smallest of the cracks in this rose colored stain glass window, and I am not exaggerating at all when I say that. Not one bit, though in all honesty, I wish I was, I wish I could just cover my ears and my eyes and imagine what I saw on the screen really wasn't what was given to life long fans of the first ever sci fi soap opera in hopes the cameo by the four surviving cast members of the original show (now three after John Frid died recently after making the group cameo), and not care about the rest, but the problem with that is, the rest is, well, at some points pretty bad, but at other moments pretty good, and yes before you feel the need to try and damn me for "not getting the humor" yes I am aware this is a spoof using the darkest of humor, and though many of the highlights are taken from it being in that vain, it still has so much more that it has to live up too, and so much more that it failed to do so on. See the problem with this film isn't really the film's fault, its well shot and well acted, the real problem, as often is in cases of this nature, with in the script. See, they try to cram as much Dark Shadows related references and jokes about the goofy nature of what was once seen as high end sci fi into what should have been a better well thought out and well written plot, instead of what seemed like a half assed idea that was tossed together by people that had only seen maybe 10 minutes of the 1991 reboot of the series, and didn't bother research the rest. Its actually almost insulting how little of a story this film really tells, and how flimsy the little bit we do have is. The actual plot, if you could call it that is not only a story of how Barnabas Collins was cursed to be a vampire by the witch Angelique, who then had him locked in a box and buried, or a story of how by 1972 the Collins family had pretty much become all but died out, and barely able to afford to keep Collinwood and their family business, the Collinsport Fish Cannery open for business, thanks to rival company Angel Bay, which just happens to be across the warf from them, and how it all somehow ends up in a third act thats all fire and supernatural powers a go-go till the very end. Infact it doesn't even actually give you the implications that anyone besides Barnabas and Angelique has any kind of super natural powers until the third act, and even then they seem tacked on in a sort of "meh we've fucked it up this far along, we might as well fuck it up some more and go for broke.." like manner. Its seriously confusing and comes off really insulting to the viewer, almost as if there was ment to be alot more in the film but it ended up on an editing room floor, or atleast you hope there was such an incident of that happening, otherwise you're gonna get really pissed off really fast, like, really fast.

Now don't get me wrong, there is alot lacking here, but, its a case of whats wrong is very wrong, but whats right is very right, like I found myself laughing outloud at all of the times they make fun of common tropes in every vampire movie and television show sense Dark Shadows, I even laughed outloud at the conversation that was lifted directly from Twilight of all films, infact alot of the humor in the film is what actually kept me from taking a nap through the second half of the film, well that and how well the cast tries to make it work with how little they have in respect to actual story or plot, because they do infact really give it their all, and can at times be rather entertaining in their own ways, its both comical and kind of painful at times to watch them try and do their best, even if in all fairness, 90% of the film is just Barnabas and Angelique yelling insults and flirts at each other in what basically comes down to a supernaturally enhanced episode of Moonlighting, and yes if you don't get that reference, I am inside crying for your very soul.

I guess my major issue with the film is just how little was done with such a rich history and a plethora of characters, infact half of the characters that made up the bulk of the cast at any given time were missing. By my count, of all the characters they had to pluck from, they only literally used a handful. Its almost as if Depp or whoever was incharge of final agreement on the script had no clue who half of the cast was! Seriously, its like they didn't even bother to wikipedia up a character manifest or something, they just randomly tossed together 4 Collins family members to be family to Barnabas and could give a damn about the rest of the cast. Where was Reverend Trask? You have a film where the loosely tossed together plot is basically a 200+ year lover's spat between a vampire and a witch, who spend 90% of the film just tossing insults at each other, as they basically destroy half of a small town in Maine, and you miss the opportunity to have a bat shit crazy hellfire and brimestone preacher like Trask somewhere in the mix? Seriously? A vampire starts ripping its way through random people in town and it doesn't get the attention of local occult studies and history teacher and town historian T. Elliot Stokes? Really? Also to the point of Stokes, how doesn't he notice that EVERY woman in Angelique's family looks exactly alike, nor does he question how in the 1700s a woman could start and own a business? Nor does the film really even touch on the history of the Collins family, they just imply there are dark things in the family and its past, only really mention Barnabas as past ones, but never really going into any detail, nor do they really explain the whole set up to the third act other then the constant bitching between Barnabas and Angelique, I don't mean to lightly spoil here, but if you go and watch the film, keep this in mind, at the start of the final act of the film, when you find out an interesting reveal about Victoria Winters, followed by Angelique dropping what might be the coolest sounding fire spell ever written, and the Collins Cannery is set ablaze, NOTHING makes any sense. None of the characters that display powers at this point are even hinted at in the rest of the film to have any kind of powers, after all, why would they have such a hard time believing that Barnabas is a vampire if they all have these abilities of their own? It seriously doesn't make any sense at all, the actual end of the film doesn't fully make sense either, I honestly feel it was just slapped together lazily.

So the big question, should you go and see this film, honestly, I'm not truly sure. Part of me says go and see it, you'll get a good laugh out of the insults volleyed about between the two main roles, and the great Jackie Earl Haley does a pretty fun job as Barnabas' earstwhile henchman Willie Loomas, and there are a great deal of laugh outloud moments, Barnabas reciting Steve Miller's "The Joker" while staring into a lava lamp, and the scene where he murders a group of hippies that most have seen in the previews are both pretty funny to, as is his confusion of the not time period correct McDonald's sign and the car when he first comes out of the coffin in 1972. But the other part of me is saying to run like the wind, as far as you can from it, for unless you've no idea of the history of the show or the characters there in, you'll be most upset and most annoyed by what exactly was done to this by a "life long fan" like Johnny Depp claims he is, though how a "life long fan" could let this happen I've no idea. So I guess the final real choice on the matter is, to make your own choice, maybe wait until it hits netflix or Red Box or one of the movie channels before bothering with it, so you don't have to worry about putting out any money for this movie that tries so hard to be so much more then it truly is, but in the end, and regretfully, fails horrible at its mission.

Well, if you haven't seen it yet, or are still interested, here is the trailer....