Captain America: The Winter Solider:
Even on film Batroc The Leaper gets no love...

I have never hid the fact that though i do love my superheroes, i never really was a fan of Captain America, its like i said in my review of his last film The First Avenger, I understand the need for Cap, i understand what he represents and stands for, and respect that, but, he never really grabbed me as a character, he was always just there, leading the Avengers, tossing his shield and taking down superpowered beings with basic self defense and some kung fu. He always seemed like he was most relevant in the 1940s, which is why i was so happy when The First Avenger was set back then, and not only did the story of Cap right, but it also got all the other characters with him right, even if they never mention that Hydra and The Red Skull are high ranking nazi soldiers. Seriously, go back and watch The First Avenger, no where in that movie does Hydra once get referred to as a nazi organization. Anyway, I was a tad bit leery going into this second movie, given that The Winter Solider was such a recent story, and also something that the non-comic book watchers might have issues following, plus i was worried it was gonna be littered with "Haha Captain America doesn't know (place pop culture thing here) isn't that funny? hahahha" jokes, thankfully, all my doubts were put to rest with his lovely action packed and fun film that honestly, was the best Marvel film sense Avengers, plus its the first marvel film truly have ripple effects it made throughout the Marvel Cinematic universe be major ripples, not small little dribbles. bit we'll get into that later on.

The movie starts out two years after the events of Avengers, where we find Captain America and The Black Widow are onboard a SHIELD transport jet talking about how Cap needs to relax and get himself settled into the modern world, go to see movies, or concerts, or even dating, which Cap jokingly says "if I did any of that, I couldn't do this sort of thing.." and jumps out of the plane with no parachute, much to the annoyance of Widow and the admiration of the rest of their group, whom you find out are freeing SHIELD vessel from a group of terrorists, headed by a man named Georges Batroc, better known as low level and mostly used for comedy villain Batroc The Leaper, who has no real super powers, just apparently can jump and use kung fu and in more modern versions of the character can use parkor as well. The movie shows Cap sneaking around the ship putting Batroc's men down one by one, as the SHIELD team, and Widow stand by and basically watch, after Cap out and out humiliates Batroc, as is customary with the character, as the team is mopping up whats left of the terrorists, as Cap and Widow continue their discussion from earlier, Cap discovers that Widow, though his back up, was also there to make sure a secret SHIELD flashdrive didn't get into the hands of the wrong people, which angers Cap that he wasn't told of the secondary mission. 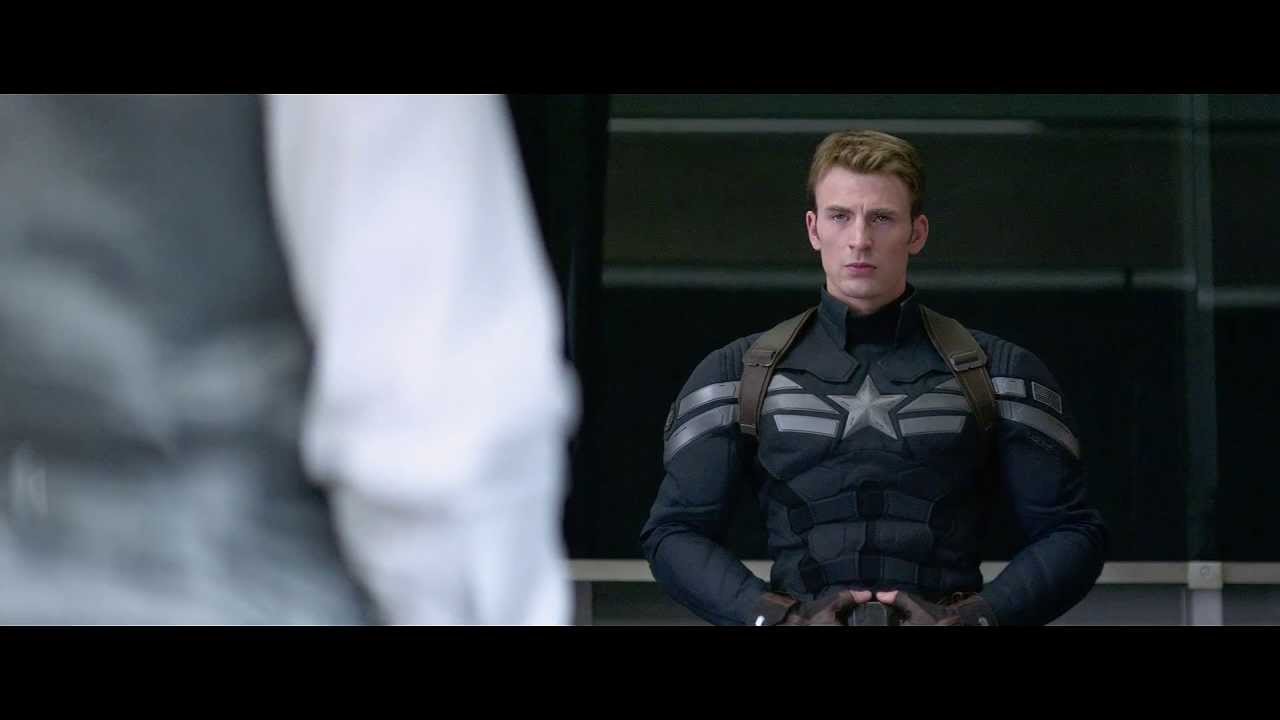 Cap heads back to the Triskelion, the base of operations for SHIELD, where he confronts Nick Fury about this secondary mission he was left out of the loop on, Fury lets Cap in on something called "Project Insight", where in there would be three more powerful then the one they already have SHIELD Helicarriers, which Fury explains, will have the ability to wipeout a person that the program seems is, or even will be, a threat, in a sense, cutting off the head before it can grow. Cap gives Fury a speech about how wrong that is, and how people aren't born evil, they choose to be, just because someone might become a threat, don't mean that always will become evil, and that not giving the good in people a chance is wrong. Fury gives a speech about his grandfather and how he loved people, but he never trusted any of them, Fury asks the director of SHIELD to slow down and take a breather before going any farther on the program, Fury's boss agrees to meet him and have a discussion about the matter. On his way to his meeting Fury is ambushed by a long haired assassin with a metal arm and his face covered up, Fury tries to elude him and his followers as he races through the streets of Washington DC, the fight ends with Fury's suburban totaled, and him hiding in Cap's apartment waiting to warn him, until he's shot through the window, causing Cap's neighbor to reveal that she's a SHIELD agent who's job is to guard Cap if anything were to attack his home, they rush Fury to the ER where he seemingly dies on the operating table, leaving Widow and Cap to discuss whats next for SHIELD as Widow tells Cap she recognizes the description of the man who attacked Fury, she claims he is a soviet operative called The Winter Soldier, the two of them decide to go off the grid, along with Cap's new friend Sam Wilson, a former pararescue trooper, who later reveals that he was the pilot of a special jetpack called "The Falcon".

From there the film becomes almost nothing but non-stop action scenes with little bits of awesome tossed in, as you see the three of them fight off The Winter Solider, discovering who he really is, and jogging his memory long enough to get him free of those controlling him, as well as discover the dark secret that has been hidden deep with in SHIELD going back to his foundation, a secret that as the triskelion and the three new age helicarriers are destroyed in a battle that is best described as beyond epic,and that becomes the second event, after the alien invasion in Avengers, to send out shockwaves that impact all of the established Marvel Cinematic Universe, including the much debated television series Agents Of SHIELD, where in the aftermath of the film's climax is the basis for the final quarter of the series first season, an action that actually turned around many of the series doubters, as they go from dealing with Z-List bad guys and lots of unanswered questions, to the forefront of the MCU, which i think was the plan from the very beginning, and if it was, it has to be one of the best examples of playing the long game for the best pay off in movie and television history.

Its seriously killing me not to give away anything thats happened in the second half of the film in case you've not seen it, or not seen Agents Of SHIELD by now, but honestly, just trust me, this film, is beyond epic, even the little jokes about how out of touch with the modern world Captain America really is, look online, each region and country got their own list of things Cap is writing down in the scene where he meets Sam Wilson, and i must admit, there is a heartbreaking scene where Cap visits his old love Peggy Carter in the hospital, only to find out her mind is going, but she still recognizes himin the brief moments she's able to remember who she is. Honestly, this movie was just so damn good. And the two stinger scenes during the credits, as is customary in Phase 2 of MCU films, you get a look not only on what is happening to The Winter Soldier, but you meet Adriane Von Strucker and the two curious cases he's been studying..

And as normal, if you don't believe me, here have a look at the trailer....