The Cleveland Show: Must Miss TV 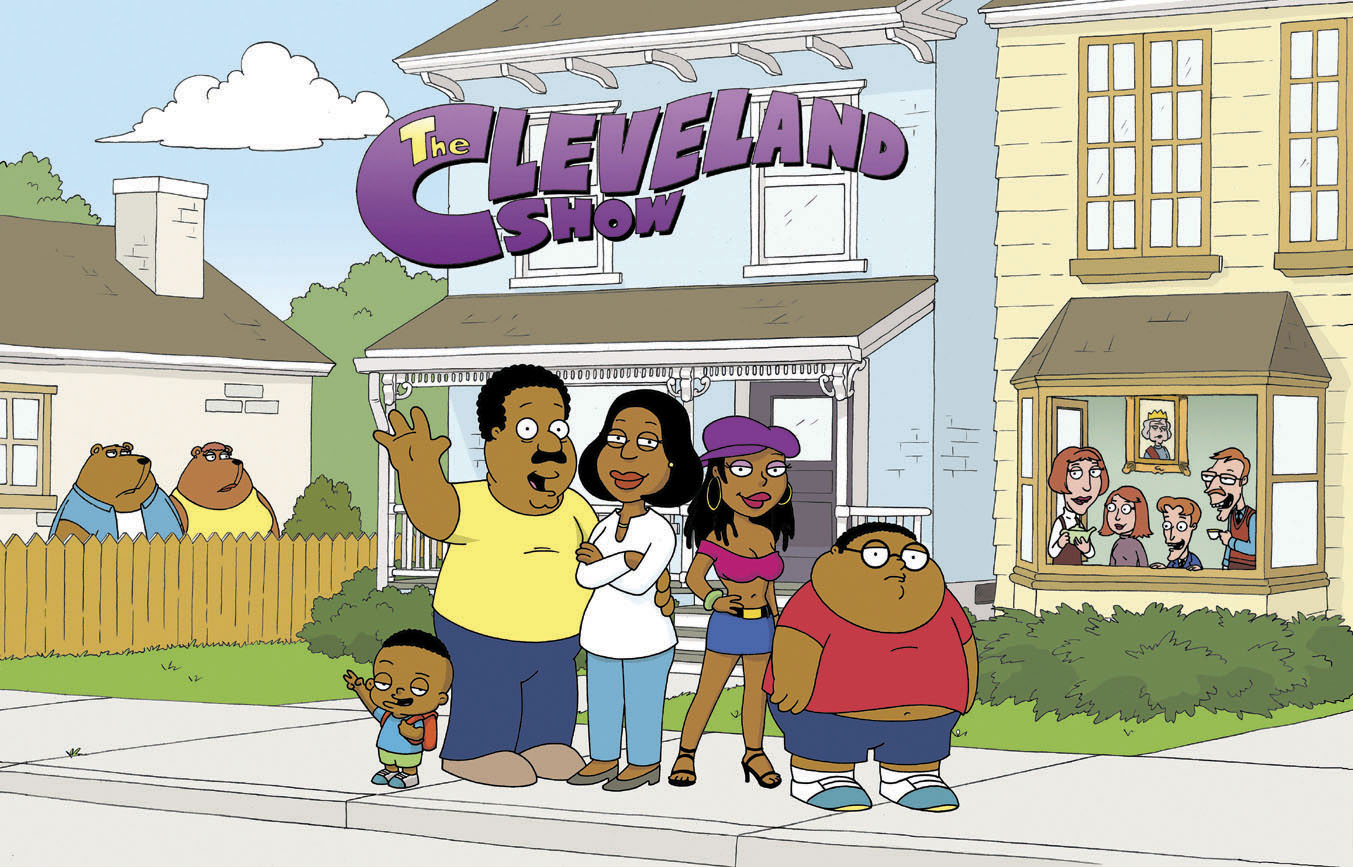 I have been debating for awhile know if i should actually do a review of this series, or if i should just let it speak for itself, and after sitting in a graveyard and then sitting by a pond where I skipped some rocks and had some antisocial guy thinking time, and I decided, that its best to do the right thing and tell the world just how horrible of a pilot episode this is.

Now let me state at the jump off, I am a very large fan of Family Guy, the series that has spun off The Cleveland Show. So I hope that no one mistakes my dislike of what I'm seeing here as disdain held over from the other show for some reason. Personally, I feel that even though Family Guy over uses jokes at times or repeats them, its still a quality well done comedy, that stands out from the crowd in ways most shows like it can't. So lets not get any misunderstandings alright?

Now, as any of you that are aware of Family Guy, are aware that Cleveland Brown is the middle aged black guy who hangs out with Peter and the Griffin Family and friends, he's a nice, slow speaking, easy going, relaxed guy, he doesn't let many things bother him, or get him down, he just needs to not take baths when Peter Griffin is doing his shenanigans, given that more then likely the front of his house will get destroyed and he'll end up on his front lawn. Cleveland has a son named Cleveland Jr. when when we last saw him was skinny and had ADHD, and he has a now ex wife named Loretta, with whom he's been separated from, for many of the Family Guy's seasons.

When The Cleveland Show starts, you find Cleveland in the local bar with his friends from Family Guy, as they sit around having a beer, he tells them his divorce is finalized, and he's lost his house to his ex wife Loretta. After asking his friends if he can stay with one of them and each coming up with a very lame excuse as to why he can't, he says "I understand..." he then goes home and takes a bath, and as happens whenever he takes a bath, Peter Griffin, who lives across the street and is the star of Family Guy, lights off a giant bottle rocket, that flies off, hits Cleveland's house and destroys the front of it, tilting his second floor bathroom's floor downward, and his tub, full of water and him, crashing to the front yard. After years of this happening, Cleveland finally has enough, says he's decided to leave town, and tells everyone he knows. Which makes them all sad and start to realize that they kind of have taken Cleveland for granted all these years.

The next scene shows us Cleveland's good bye party, where he tells everyone he's going to California, where his old baseball hitting coach Joe Torri has offered him a job as a talent scout for the his baseball team The LA Dodgers. Everyone expresses shock at this, not knowing Cleveland knew Torri, to which Cleveland points out that one of the reasons he's leaving is because of the fact no one seems to care or ask anything about him, they just expect him to go along for the ride on everyone else's misadventures, and that he feels its time he have some of his own. Everyone sees the point he's making and wish him luck at what he is planning to do with his life. The next scene is Cleveland and his son Cleveland Jr., who has now gone from skinny and ADHD to fat and talks slow and kind of muffled, muffled because apparently he's always eating something, are packed up and ready to leave for their cross country trip to a new life. After their good byes, which I guess will leave people saying "Good bye chocolate people" for awhile, they start driving.

This is the point where the theme song is played in the episode, I have to admit the theme song is kind of almost cute, but not enough to keep me singing it or coming back for more, infact, outside of the bits before Cleveland leaves for his new life, the theme is really the only thing that really made me laugh in this entire pilot.

After the theme, is when the speeding train derails and falls into the canyon of crap and fail below...

On their trip Cleveland and his son drive through Stoolbend Virginia, which happens to be Cleveland's hometown, which he only mentions in passing at first, they drive through the center of town, Cleveland and his son comment on how they still have a Woolworth's Department Store and comment on how they through they'd gone bankrupt years ago, leaving Cleveland to say "I guess no one bothered to tell them..". As they go, Cleveland starts to talk about his youth there, and decides to show his son the baseball trophies he'd won for the local high school. They stop at the school, Cleveland can't find the trophy case, so he goes to find someone to direct him to it, he is shocked to find his first love Donna, who is working at the high school. They talk and Cleveland discovers she's a recently separated, and that she has two children with Cleveland's former best friend, and Donna's soon to be ex husband Robert. After some flashbacks that show how Cleveland always took care of her and was nice to her, while Robert was always taking credit for all the good Cleveland did for Donna, Cleveland decides he's going to atleast try and tell her how he's always felt about her.

Cleveland and his son show up at Donna's house for dinner that night, thats where they meet Donna's neighbors, Lester the redneck, Holt the wanna be 80s style hipster, and Tim, the Russian sounding bear that wears a shirt and tie and works in an office. Lester is a skinny jean vest wearing, missing tooth having redneck who seems to always carry a shotgun and to stupid to notice that Donna is black, but shoots at Cleveland and his son then says "hey Donna, there were some black fellers on your lawn....." followed by "oh wait, they're with you... and you're black." or something, Holt is a short man with a Brooklyn like accent and feels the need to make up for his short size with always having expensive gadgets and a fancy car, he also seems to not like to tell people he lives with his mother. Tim is a Russian sounding bear with a smoking habit and the need to mock humans that get frightened at the fact he's a bear, he has a son and a wife, who I'm assuming are also bears, you know, because bestiality is a frowned on in most places. From here we meet Donna's two kids, her teenage daughter Roberta, who apparently is strong enough to "fight off six Al-Qaeda's" which seem to ambush her at random times, and we also meet Donna's son Rallo, who is five years old, has a large afro and seems to say whatever comes to his mind. After dinner, Cleveland decides to take Donna up on her offer to let them stay for afew days, this allows Cleveland to put his plan to tell her how he feels into action, and to also show her that he's a good male role model, he helps out both of her children, teaching Rallo how to "play it cool" so no one notices him misbehaving, and puts he puts the fear of god into Roberta's boyfriend, a white kid named Federline Jones, who seems to be under the impression he's actually black. On their last day there, Cleveland discovers that Donna's ex, Robert has come back to try and make things work, this finally makes Cleveland lose his temper and after he yells at Robert and tells him he's not good enough for Donna and tells her all the things Robert used to make him do and then take credit for, Donna decides to stay with Cleveland, telling him she loves him and was waiting for him. The episode ends with them getting married and Cleveland saying "I might not be a major league talent scout, but I think i hit me a home run.." followed by his trademark laugh.

Now, see, here is my thing, it isn't that its a *bad* show per say, so much as its mostly things we've seen over and over again before. Its the same concept as Family Guy, just with different characters, and alot of times the same jokes too. Now I don't mind running or recurring jokes and skits, if they're done right they're very funny and never lose their charm, its just, why do we need another program thats doing them? If we're getting enough of them with Family Guy, why do we really need the exact same jokes on a show that is basically Family Guy but with a black family? Atleast American Dad writes its own material. But this, seems kind of like, for lack of a better term Bizzaro Family Guy, and well, I don't know if thats really so much funny as it is lazy on the writers parts.

I guess this pilot is different then the final product, and I guess this doesn't include the Pennyapples, a British family that lives next door and lives as if its Victorian era england, who are supposed to be part of the show as well, but even still, the joke that all British people live in that era is already been used on Family Guy as well, so its really just using the same jokes over and over in that respect till.

I just don't know, I'll give the show a chance, but I have to say its not looking like its gonna be all that great. Though I could be wrong, last year's pilot for the American take on "Life On Mars" was a total bomb, so much so the network ordered a completely new pilot and recasting, and then the redone pilot premiered, I loved it. So who knows? but, really I'm still not holding out alot of hope here.

Email ThisBlogThis!Share to TwitterShare to FacebookShare to Pinterest
Labels: Television Reviews, The Cleveland Show, US Television