Admit it, if you read comic books as a kid, or as an adult, or at any time in between, at one point, you imagined yourself as a superhero. Seriously, be honest here, you know you have, you know you imagined yourself up a name, what your special powers or driving force would be, maybe even drew yourself standing in a heroic pose wearing a suit you designed for yourself, with a word bubble of you proclaiming your very own catchphrase while your name is drawn all logo like under you. Seriously, don't act like you haven't at some point in your life done that, anyone thats ever read a comic book about superheroes has done that. And though we all find ourselves at some point or another daydreaming about our dark and mysterious past that somehow involves us crossing paths with Wolverine (for those that don't know, its law now, every comic book character ever has to have a dark and mysterious past that connects to wolverine somehow.), that bit of our brain that regulates logic and reason always talks us out of every really attempting to get ourselves a suit and get into the crimefighting racket, we make up excuses, things like "I'll get my ass kicked", "I'll get killed.", "I can't do that and have a day job at the same time..", ect, just for a second, imagine what life would be like if you actually did it. If you actually went all out, got yourself a super suit, some superheroing gear, a super cool hero identity, the whole shebang! Can you picture that? Its pretty sweet right? No, its better then sweet, its Kick Ass, because thats what the film Kick Ass is about, a nerdy young kid that decides its time to get his LARP on, real world style, and in the process, truly becomes a hero that the whole city can believe in.

Kick Ass tells the story of mostly invisible to the world comic book nerd Dave Lizewski, who lives in Brooklyn and finds himself wondering "why hasn't anyone ever tried to be a superhero?" alot, looking at the world he lives in where bullies and criminals roam the streets openly committing crime while bystanders just look on doing nothing, or in some cases turn their heads and walk away. After being mugged outside of a comic book shop him and his friends hang out at, Dave finally has had enough, and decides to do it, to make himself a suit, and get his superhero LARP on, but unlike with other forms of LARP, he kind of hopes this will eventually lead him to getting noticed by girls. (remember nerds of the world, live action roleplaying, or LARPing for short is the most powerful cockblocker of all even more then a pocket protector and speaking klingon combined.) Dave orders himself a wetsuit off the internet and after modifying it to fit a design he created one day while daydreaming, he dawns the mantle of Kick Ass, and sets about his career as a superhero. Its slow at first, he doesn't really do alot of ream crimefighting, until he happens across these two thugs that normally torment and harass him seemingly daily, attempting to break into a car, Dave quickly runs into an alleyway, dawns his Kick Ass suit, and a pipe, and decides to take them on, and after mocking his suit and what he's doing, he starts to beat the thugs up, and does rather well, until one of them stabs him in the stomach, after they run away, as he gets to his feet and tries to find a phone to call 911 to get himself to a hospital, he's hit by a car, the driver of which stops, looks back at him, and then drives off. Dave wakes up in the ambulance long enough to ask the EMTs to not tell anyone he was wearing his Kick Ass suit, the EMTs say that his cloths were so bloody that had to be removed in transit for them to work on him to explain his lack of clothing when he gets to the hospital. 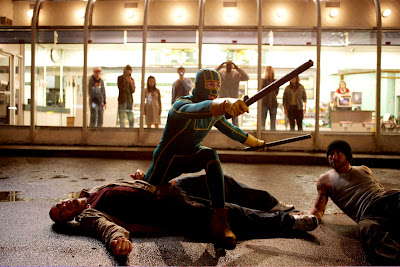 the film then jumps forward to Dave's release from the hospital, looking at all the pins in his body on a body x-ray chart, joking that he looks like Wolverine now because of all the metal in his bones, however its unclear if Dave's bones have a dark past with wolverine or not. Dave returns to school where his friends resume teasing and mocking and generally being jerks to him, he's then asked out for coffee by a girl named Katie Deauxma whom he has a massive crush on, he's then explained by his friends that she wants to be his friend because once word got out that he was found with out clothing on, somehow this gets translated into him being gay, much to Dave's shock and horror, but to get to know Katie, he decides to let her think for the time being that he is, because, you know, gay dudes get all the hottest girls, or whatever that song says. After this, he gets his new Kick Ass suit in the mail, including now holders for two nightstick style batons, which he carries on his back much like swords. Dave now creates a myspace page for Kick Ass and sets out to patrol the streets at night doing public services and the like, when looking for a cat named Mr. Bitey, Dave accidentally happens into what looks like some sort of fight, accidentally tripping the man running from a group of thugs. Seeing whats going on Dave jumps into action, first telling a nearby teenager to call 911, and then jumping in to defend the beaten man. The teenager runs into the diner nextdoor and yells "there is a guy dressed like a superhero fighting a group of gangbangers outside.... ITS FUCKING AWESOME!!" and runs over to the front of the building to film it, everyone getting out their video and camera phones to record it as well. As Dave holds the thugs off, one asks if he really wants to risk his life for one worthless person, Dave replies "three assholes beating up one guy while everyone just watches? Yeah I'd rather die." the thugs hear police sirins in the distance and run off, the beaten man thanks Dave as he checks to make sure he's ok, the teenager who called the police runs over with his camera phone and says "that was fucking awesome!! who are you?" Dave looks right in the camera and says "I'm Kick Ass..". That video gains world wide attention and becomes the most viewed video on the internet, the whole world is talking about Kick Ass now, everyone loves him and what he's doing, Kick Ass becomes one of the most friended people on myspace, where he says if he's needed, he can be contacted. This puts him into the spotlight, but also puts him on the radar of Frank D'Amico a major criminal in New York City, as well as on the radar of Damon Macready and his daughter Mindy, who are also going around under the vale of being superheroes Big Daddy and Hit-Girl, intent on taking down Frank for framing Damon and sending him to jail for years, causing Damon's wife to commit suicide, dying not long after giving birth to Mindy, who was raised by Damon's best friend and former police partner until Damon was released from prison. Damon and Mindy vary from Kick Ass by the fact they sort of have a very violent Robin Hood like approach, using the money they take from the criminals they foil and in some cases murder to fund their war on D'Amico. Damon and Mindy decide they can work with Kick Ass and mold him into a better hero, they help him deal with a small time drug dealer and then later appear to him in his bedroom explaining he needs to be more careful, and that they will be in touch, then telling him how to contact them if he is ever in need of them. Dave kind of sits on his bed completely spooked at this point, thinking he's in far over his head, but snaps out of it and realizes he is needed and continues on.

From there the film starts to branch out and tell the story of both Dave and Damon and Mindy, and how they both keep interchanging with Frank D'Amico believing that its Kick Ass taking out his men and stealing his drugs and selling them, and after many failed attempts at dealing with Kick Ass, Frank's son Chris decides to take matters into his own hands, under the guise of The Red Myst, another superhero with alot more tech and his own website. He puts out a message to Kick Ass to meet up, which they do, and before Red Myst can take Kick Ass to the ambush his dad has put up, Damon and Mindy hit Frank's men at their business front, killing them and lighting the place on fire. And from there, the film starts to pick up, as everyone starts to move themselves into position and where they're going to be for the endgame, Dave unaware or what is going on, Frank preparing to destroy whoever has been destroying his business, and Damon starts to put his plan into action, gathering what he needs to finally take down Frank an vindicate his years away, and the suicide of his wife. Its really goes from a brilliant story of a nerd out having himself the ultimate live action role play session while all of New York City watches on and cheers, to a non-super powered superhero game of chess on level with like a Batman or Punisher story arc that would leave people talking for years to come, and with the promise of both more comics and films in the Kick Ass world, the ending leaves you hungry and excited for more. As well as wondering how to become your own kind of superhero.... and remembering your hot classic literature teacher from high school. So the big question, was this film really any good outside of the superhero genre? Sure, I think your average movie viewer would rather like the film, after all who doesn't like a good mental chess game, even if half of the players are unaware they're playing chess at all? Some people might be a tad shocked by Mindy's rather filthy mouth, but for an 11 year old who's an expert trained killer, who also has almost no problem at all slaughtering criminals and thugs, though why of all that swearing coming out of the mouth of an 11 year old being your biggest issue, I have no idea. But in general, the film is really alot of fun and exciting and a good way to just shut off your brain and enjoy the action and fun of it, you won't really be let down if you do so.

And for those not sold yet, here is the trailer...