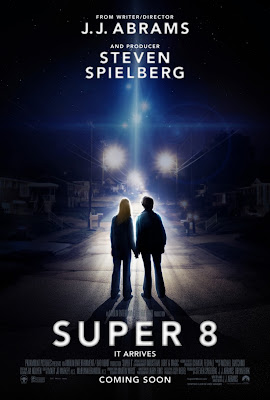 Like most people, I've become a big fan of J.J Abrams during his recent television and movie exposure (overexposure?) from Fringe to Star Trek to Cloverfield to everyone but me apparently loving Lost, J.J Abrams has been producing, writing, directing just amazingly big hit over big hit, its almost unheard of outside of afew now legendary directors, taking this all into account, when I read the early reports of what his next project would be, the supernatural thriller Super 8, I felt I was rather worried that maybe he'd hit his speedbump in the road. But as is almost always customary with things of this nature, I was happily surprised and delighted to discover that I was wrong, and infact Abrams' has once again, turned out an amazingly wonderful film, that as always is the case with him, invokes fond memories of watching the masters of film as they produced their crafts.

The film takes place in 1979 in the fictional town of Lillian Ohio, where we meet a then 13 year old boy named Joe Lamb, he's just lost his mother in a factory accident, and his father police officer Jackson Lamb, believing that another local, Louis Dainard to be at fault because she was covering his shift because he was drunk, is the blame and takes him into custody after Joe's mother's wake. Fast forward afew months where we once again see Joe Lamb, but we now meet his friends Charles Kaznyk, Preston, Martin, Cary, and Alice Dainard, Charles is an aspiring film maker who's hired Alice to star in his low budget film that he's filming in town with the help of his friends, and using his Super 8 home movie camera. Alice steals her father's car to drive them to the location they're filming their next scene at an old train depot near the edge of town, while setting up for their shot that needs a train to be going by in the back ground, they witness a truck driving onto the tracks heading straight for a high speed transport train, this causes a massive derailment, there is a fantastic wreckage, the kids survive luckily, and as they investigate the debris they discover the truck that caused the wreck, it was driven by a teacher of theirs who warns them about not talking about what they've seen there, they don't truly understand what that means at this point. They get out of the area as the Air Force shows up to take care of the scene.

Over the next few days strange things start to happen all over town, pets start to act strange and run away, everything from kitchen appliances to car engines to power lines go missing, and Alice goes missing, her father claims that she was taken away by a "Creature", people are confused and paranoid and starting to wonder just what the hell is going on, and when the air force claims they need to evacuate the town because a major fire is coming their way, most people start to flee, while very few stay behind and ask questions, though no one is aware that the air force started the fire to drive them all out of town so they can properly search the area, they've all been transported to a near by air force base until farther notice. During their time there Joe finds Alice's father, who tells him of Alice being taken away by a monster, Joe, unlike most, believes him, and after telling his friends of what he was just told, they all decide to go back into town and try to find her. From here the film becomes a strange mix of Cloverfield, Close Encounters of The Third Kind, E.T and (if you remember your tv adaptions well enough) Stephen King's It, as the kids move about their small town trying to not be seen by the Air Force, and trying to not only spot the creature they believe is loose in their town, but uncover proof of its existence. Its part monster movie, part sci fi thriller, with just enough drama tossed in to make it a nice mix.

I know alot of you are gonna cringe at the compare to Cloverfield, when mentioning that film I'm well aware of how I am among the minority who actually understood and rather liked that film, and thats fine, and though some scenes are shot through the Super 8 camera, its important to note that 90% of the film is not, its only used for dramatic effect, and nothing more, the plot is also very similar, rampaging monster let loose by accident from its secret holding facility, but instead of in a giant city, its in the middle of smalltown america in 1979, it might to some seem like the same old same, but its really not, not by a long shot. You find yourself wondering just what is going on, is there a creature rampaging because its all that it knows? Is it fighting for its freedom over land, sea and air, and only acting violently as a means of defense against those who mistreated it? Its a wonderful puzzle that takes its time to unravel and come to its natural answers. It also shares a ponderance with one of the greatest modern sci fi films of the last 10 years, District 9, by making you ask yourself logically, if aliens really did land here on earth, what exactly would we do? Would we be nice and friendly, would they be friendly in return, or would we, as the human beings that we are, screw the whole thing up to the point we would ruin the entire experience over something petty, selfish and small minded. I do love when a film makes you wonder about that.

So the big question now, is Super 8 worth seeing? Well ofcourse it is! The summer is the time when the biggest and the best are trotted out to the masses and we're expected to shovel wave after wave after wave of our cash into the pockets of those who make these films, and though 90% of them really aren't worth the time or effort it takes to sit through them, Super 8, thankfully, is in the minority, where its almost actually worth more then the ticket price to see it. The kids play off each other so well and it seems so organic, and you truly believe that they are just random kids in a small town in southern Ohio, they also went out of their way to amke it feel like it really is 1979, I always find myself looking in the background for hints they missed something thats not from that time, and I found none, I do so love when that happens, it makes the movie that much more enjoyable. So if you aren't into comic book movies, or pointless sequels that are the exact same movie set in a different location, or you aren't up for a movie about a young wizard, his geeky friend and the plucky young girl who assists them fighting magic hitler, or any of the other big films dropping this summer, and you want a nice well done bit of Sci fi that transcends science fiction as a genre and just becomes something amazing and wonderful all on its own, then definitely give Super 8 a shot.

But if you aren't convinced yet, here is the trailer to the film....